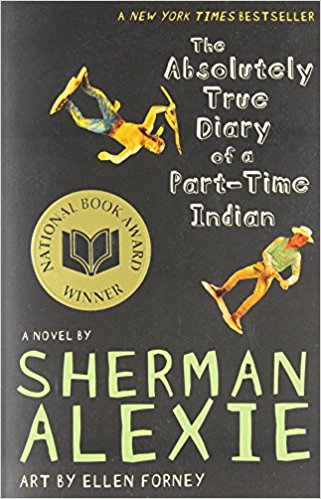 I enjoy books about the reservations and Native Americans and what life is like for them. Although not in the same age range as YA novels,  I loved the Longmire series.

The book begins with the character telling us that he was born with water on the brain and due to that he has some abnormalities, such as he’s skinny, has large hands and feet,  wears glasses due to his eyes not cooperating together. Then he tells us he lives on the reservation and that he is poor. Arnold, although his nickname is Junior, loses his dog to being shot because he’s sick and they don’t have any money. He also says that he gets bullied a lot and is part of the black-eye club. One of his teachers tells him that he must get off the rez as soon as he can so he decides to transfer to a white school. His best friend, Rowdy, becomes more like an enemy, but that’s okay. He ends up making new friends, ones who kind of stick out like he does, but in other ways. Penelope is an anorexic and Gordy is a genius. Because he is going to school off the reservation, he ends up identifying as a part-time Indian. He ends up going through a lot of loss, his grandmother passes away due to an accident with a drunk driver, his sister gets killed in a fire and a family friend gets shot in the face at a gas station. Although so much happens, Arnold comes out okay and even becomes “friends” again with Rowdy.

Click on the image to visit the author’s Amazon page to find more books written by Myers.