About five years ago I decided to stay home with my son after going back to teaching for a year once I had him. At the time I was going to a Crossfit gym, but once I was a stay at home mom I couldn’t get away as often, so I decided to bring Crossfit to my home. I used an app that let me gather my gym’s feed for the workout of the day (WOD) as well as other gyms around the United States. I remember it being called an RSS feed, and I remember it being pretty simple to put it into this app and see all posts from all the gyms in one location, but I had no clue that an RSS feed reader applied to more than that.

Flash forward to now…RSS readers have come back into my life, but in a very different way. I’m actually pretty impressed with what they are capable of and I’m also astonished that I have not discovered them sooner. RSS stands for Really Simple Syndication which is a fancy way of saying that it puts all of something in the same location for easier access and viewing. The “something” it is referring to are blogs, articles and in some instances social media. I found a helpful post on Zapier.com that can be found here which highlighted the top ten free RSS feed reader apps in 2018. It was interesting to see how similar, yet different each was. Volvovski (2018) claimed all the sites she listed were free, or offered a free plan, allowed for full read of the blog post, had web apps for the site available and were easy to use. As I read the highlights for each of the ten readers, I found myself drawn to two. The first was Feedly because of it’s simple, clean and sleek view. I like things that are pretty and up with the times and I felt this one really looked current with it’s aesthetics and layout. The other one I liked was Flowreader. This one not only allows you to house all the blogs that you follow, but also social media which I thought was fantastic. I have a Twitter, Tumblr, blog, and Instagram that I would love to house all in one location. 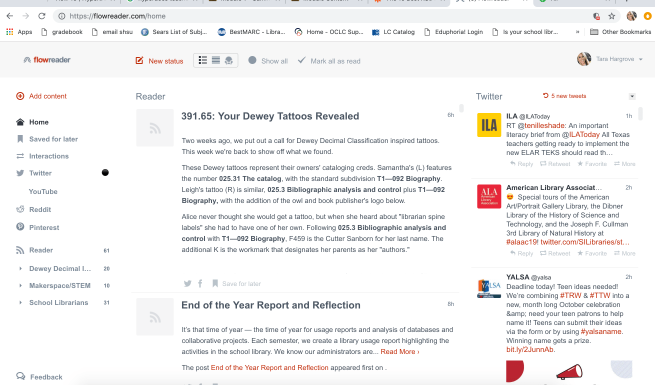 But there’s a catch, when they say social media, they meant Twitter, Youtube and Pinterest only. Also, I don’t like the aesthetics of Flowreader as much as I do with Feedly, but I was willing to use it to at least get my Twitter feed added to where all my blogs are. Then I ran into another problem. There was a blog that I really love and for some reason, no matter how I inputed it, it would not get added to my RSS feed. It kept telling me that no feed was found. I grew a little flustered and decided to sign up for Feedly and see if the blog would work with that site. Sure enough, it worked! As a matter of fact, all of my blogs worked seamlessly AND it gave suggestions for other blogs that were similar to the ones I uploaded into my feed. Both sites were simple enough to use and gave multiple views for reading your blog posts, but I still liked Feedly’s better.

On another note, I did look into RSS apps that were meant for social media only and discovered that all of them have a price. They all allow for a free trial, but it doesn’t last long and you can only house 2-3 social media sites for the free trial. I think it’s a great concept since these sites also allow you to post to your accounts via their site, but I’m not up for paying for it. If YOU are interested though, a couple of the popular choices are Hootsuite and dlvr.it. This post can explain more about social media and RSS feed readers.

Here are a handful of blogs I enjoy following (especially now that I’m a NOVEL librarian)!

Feel free to check out my new Tumblr account here!

Hope you enjoyed! Feel free to leave me comments or questions!

9 thoughts on “RSS Reader? What’s That?”

Next activity-making snow! ❄️In Narnia when the White Witch rules, it’s always winter but never Christmas! So we made snow today! Such a fun activity for any age! #mwisdmatters #librarianlife #makeitcount #bethegood #handsonlearning #teacherlife
High tea anyone? ☕️🥄Perhaps with some butter cookies and Turkish delight? Wrapped up our book study over The Lion, the Witch, and the Wardrobe by CS Lewis yesterday and tried hot English tea and Turkish delight today. They loved it! I think the boys were more excited about our #teaparty than the girls 😝! #mwisdmatters #cslewis #makeitcount #bethegood #beyou #itsthelittlethings #smile #hightea #turkishdelight #learningisfun
My STEM Club kiddos presented at our school board meeting, showing off their progress with the activity chair we have created for a physically disabled student at our school. They did phenomenal and I’m so proud of them and their big hearts! #mwisdmatters #librarianlife #makeitcount #bethegood
Travis STEM Club students putting the finishing touches on our project! We’ll be showing our progress off to the school board Monday! ☺️🤓 #travisstem #mwisdmatters #schoollibrarianlife #stemshenanigans #STEM