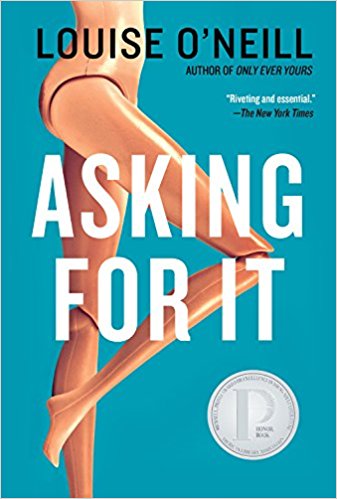 This book is a must read for young adult females. My sister is a high school English teacher, and today over lunch I told her all about this book! Her mouth dropped and eyes popped as I told her some of the details in this novel due to the rawness but very realness that this story entails. Although fictional, it is realistic. We have all heard the stories of a young girl being raped at a party and it has been seen differently by all types of people. Some believe that young girls, when they dress provocatively, ASK FOR IT, while others may say, it was a mistake made by the girl but she doesn’t want to own up to it and then you have those who encourage her to tell her story, to be honest and can empathize with what she has been through and will continue to go through in the aftermath. Asking For It, will make you uncomfortable due to some sexual content, but it will also make you, as a female, uncomfortable in a sense of what we think on the inside. Our private thoughts as women.

This book takes place in a made up town in Ireland. However, the author came across a real incident like the one in the book that happened in America. (But the vocabulary is rich with Irish terminology which I thought was fantastic!) So the setting isn’t crazy relevant as far as being able to relate. The characters are kids that are around 18, some younger, some older and they all live in a pretentious area where all their parents are friends who compete to be the best, talk about each other, give compliments that are really cut-downs and their children are mini-versions of them. The main character, Emma (aka Emma), is an 18 year old student who apparently is gorgeous and she knows it. Her family seems well off but not rich. She constantly is competing with her girlfriends and knows that her looks are what she has going for her, which she deems most important. All the boys look at her and she loves it. She even wants her best friend’s boyfriend to take interest in her, just because she wants the satisfaction of knowing he fancy’s her. The girls are accustomed to partying hard and dressing up in short dresses with low fronts and designer heels. Emma has slept with many boys and on the inside she has the battle of doing so because she wants to make them happy, not herself, but she does so willingly.

One evening at a party, she is drinking heavily and then takes a pill off an older guy. She starts going “off her face” and then takes the guy into a bedroom at the party they are at. She “willingly” (and I use that term loosely) has sex with him. On the inside she doesn’t really want to because she is slightly out of it, but she agrees. Then several boys walk in and they all partake in some prescription pills one of the boys has of his mothers. She wakes up the next late afternoon on her porch, sun blistered and with her mother freaking out. A Facebook page has been created for “Easy Emma” with pictures of her being gang raped. She at first denies it, saying she was pretending to be asleep and is afraid of ruining the boys’ lives, and not being thought of as pretty. Now her struggle is even worse, as her brother convinces her to use the word she hates, rape to pin on these boys. Her life has gone down the drain and her family is torn apart as they have to listen to “she was asking for it” and “what did she expect dressing that way?” and other comments of people judging her. This book really makes one look at the issues women face with coming forward about a very serious matter.

I enjoyed this book because I was floored at what a rape victim might go through and especially in this circumstance. It’s sad. I can absolutely understand some of her inner thoughts, but I feel so sad that she struggles with the fact that it wasn’t her fault and she needs to stop worrying about everyone else.

This book won the Michael L. Printz award in 2017 and was on the Best Fiction for Young Adults list in 2017 as well.

Click on the image to visit the author’s Amazon page to find more books written by O’Neill  Another book that would be a similar read would be Speak by Laurie Halse Anderson.