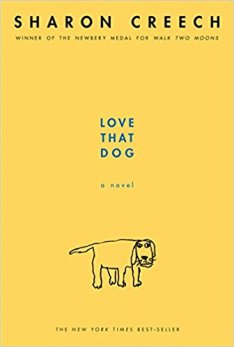 A book written in poems by a boy named Jack. So simple. So pleasant. You can see how he evolves with his poetry writing. Each entry is dated and he begins by saying he doesn’t want to write poetry because boys aren’t suppose to, only girls. You can tell he is having “dialogue” with his teacher through his writing, perhaps in a journal. She gets him thinking with different poems from Robert Frost, William Carlos Williams, Valerie Worth and Walter Dean Meyers (which becomes Jack’s favorite). His first poem that he attempts is about a blue car. His teacher is asking him questions and he is reluctant to answer them at first. But finally you figure out, through one of his poems, that the blue car was the car that hit his dog, Sky

This book is lovely and written so uniquely. I can see it inspiring students and teachers alike to try out writing poetry a little more.

Click on the image to visit the author’s Amazon page to find more books written by Creech(check out Hate That Cat).